The Basics of Event Security

When people attend an event, they expect to enjoy themselves and be safe. In fact, safety often doesn’t enter the consciousness of most folks attending special events because it’s assumed.

Keeping Firearms & Other Weapons Out of Venues 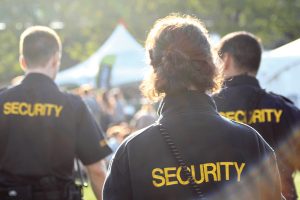 One of the best ways to ensure the safety of concert-goers and attendees of other large events is to deploy guards trained at effective weapon screening. Security officers under the employ of Nationwide Investigations & Security, Inc. are trained to identify people who might be carrying a gun or other weapon. They’re also trained in the proper use of metal detectors and handheld metal-detector security wands.

To keep firearms out of large venues, we recommend at least two security perimeters to screen for weapons and other prohibited items. Each perimeter should include at least one of the following security screening measures; pat-downs, security wanding, or metal detectors.

Whether we’re talking people who wear trench coats in the heat of summer or a hoody and sunglasses for no apparent reason, identifying a person that’s actively concealing their identity or a weapon often relies upon the experience of the guard, that’s if there’s even a guard on duty.

Identifying individuals who are practicing cover & conceal tactics is the best way to prevent disaster. The first part of providing security is keeping watch. With a security guard or guards on duty, most undesirable events are prevented as a result of their mere presence alone and others are thwarted before an incident, the moment a threat is identified.

Professional Security Guards, At Your Service

If you’re looking for a professional security agency to provide security for a special event, concert, performance, church or religious setting, commercial or retail establishment, or a large or small venue, consider forming a relationship with us and working with our well-trained guards. We provide armed and unarmed security guards, specialized security guards, and security assessments.

For more information about Nationwide Investigations & Security, Inc., to schedule service or get a quote, call us today at 1-800-294-6042. Ask for Mr. Hollimon.